“No act of kindness, no matter how small, is ever wasted.” -Aesop 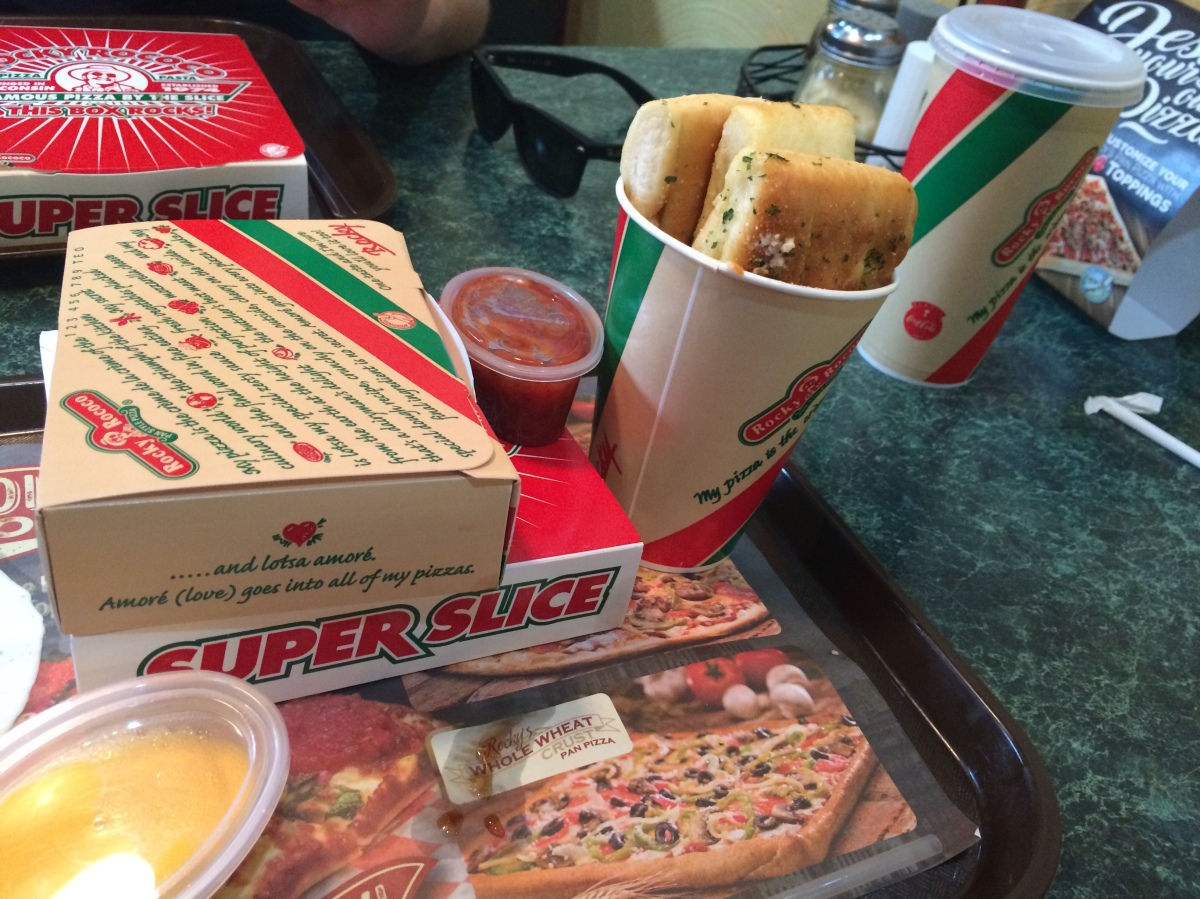 Growing up in a small town like Whitewater, Wisconsin it was easy to know just about everyone.  From the local cops to the kids skateboarding on the church steps, the town drunks to the one and only cab driver, all the business owners, the athletes, the slackers and even the creepy old man that walked around town releasing balloons into the streets.

Back when I was coming-of-age, the best person to know was the employee running the register at Rocky Rococo’s Pizza on Tuesday.

Anyone aged 11-18 in the late ’90s and early 2000s in Whitewater knows the highlight of most any week was undoubtedly Rocky’s $1 Slice Tuesday.

The best deal of all time?

Arguably one of the greatest deals in pizza history, every Tuesday we were blessed with a slice of Detroit-style pan pizza for a buck—that’s right, you could get a huge slice with basically the spare change you found in the parking lot on the way into the place (I think that actually happened to me once).

If you’re familiar with Rocky’s pizza, you know that getting a slice for a dollar is nothing to shrug at—when it’s hot and fresh, it’s outstanding.  Rocky’s has great sauce, a doughy crust that gets golden and crisp around the edges and is highlighted with hearty chunks of hand-pinched sausage.

Since moving away I’ve found that quality varies drastically from location to location, but the Whitewater shop, with their dirt cheap deals and their pepperonis-under-the-cheese, will forever hold a place in my heart.

Back in my Middle School days in between skateboarding and loitering, I’d always meet friends at Rocky’s.  We would have slice eating competitions and literally stack those tan rectangular boxes as high as we could go.  It was a glorious time for pizza binging.

Since it was easy enough to pool together a buck for some pizza, it became the place for many teens to gather—a hotspot for friends, teammates or even a date.

Just as Rocky’s was packed with hungry teens it was also, mostly staffed by teens, so, in a small town, where everybody knows everybody it was pretty easy to have an inside man.

A colleague on the opposite side of the counter that could potentially score you an extra dipping sauce, a cherry coke in your “water glass” or maybe even extend a trash-can destined breadstick or slice your way.

Because of food safety regulations those slices and breadsticks can only sit on the heat rack for so long, so I guess the high school kids manning the front counter figured it’d be best not to let them go to waste.  The resulting generosity from them always left me feeling like a celebrity.

The gift of a slice goes a long way.

Back in those days, I was socially awkward, self-conscious and insecure and any sort of thoughtfulness from a peer put me on top of the world, especially if it was a pizza perk at the most happening place in town.

As my friends and I would pack one of those maroon booths, I recall glowing at the sight of my $1 slice and whatever extra I scored upon receiving my order.  In my mind, I had the connections and loyalty of a “made man” from a mobster movie.

As I reflect on the recent loss of an old friend who was once among the ranks of those employees, I’m transported back to the glory days of $1 Slice Tuesday and the realization that our kindness can outlast us.

What pizza taught me:

Life is short, but the courtesy we extend to others has lasting effects.  To all the Rocky’s alumni out there (I know there are many of you) I salute you.

What I’m eating: Rocky Rococo’s slice of the day: Pepperoni Motherload and Sausage and Pepperoni Superslice.

RIP Kyle, you were always a great laugh, a good conversation, and an accepting, righteous dude.

“Our greatest glory is not in never falling, but in rising every time we fall” -Confucius

Has a stress-filled day ever turned you to food?

When I’m pushing my threshold I’ll get the urge for pizza—my security blanket—the thoughts of cheese and pepperoni often tempting me to yank the steering wheel across busy lanes of traffic to the nearest Little Caesars.

I know, it goes against my cardinal rule of “no pizza until Friday”, but on the brink of burn-out, it’s easy to rationalize a mid-week pizza sesh.

Last week I faced such a stress-inducing day that stress-eating pizza seemed like just about the only viable method of managing.

To cheat, or not to cheat?

As I internally debated my moment of weakness, I weighed the pros and cons of breaking my diet, by breaking for pizza:

A mid-week slice would certainly turn my frown upside down?

But, what about the regret and disappointment I’d create for my future undisciplined self?

Those thoughts wrestled in my mind on my commute home, until off in the distant some shiny new signage, on Madison’s Mineral Point road caught my eye.

A new spot in town I’d been hearing about, with the promise of “a super fast pizza experience”.

We all deserve a break every now and again?  Right?!

Ordering pizza on a Tuesday.

Thanks to the fad of fast-casual pizza shops popping up all over the country getting a “superfast” pizza made-to-order is getting a lot easier.

National quick-serve pizza chain Mod Pizza has recently expanded 3 new locations to the Madison area and their speedy, customizable pies are perfect for an impromptu visit.

It’s like the Subway or Chipotle of pizza, where you stand in line in front of a sneeze guard and pick your toppings as you move towards the register.  Then the pizza goes into an 800° oven and minutes later out comes your pizza, just the way you want it.

At Mod you basically get an 11-inch canvas to go crazy and with 30 available toppings, the customizations are endless.  What’s better than your own personal pizza when you’re trying to give yourself some personal time?

A slice to keep my sanity.

Pizza at the end of the week is usually the carrot that keeps me going, but everybody needs a break sometimes and I don’t think that’s a bad thing.

No matter how disciplined or motivated we are there will always be moments in life when we reach a boiling point and we need a breather.

The most important part of giving ourselves a cheat is simply getting back on the horse.  Instead of beating ourselves up we just need to course correct and move on.  It’s not like one hiccup in a diet routine is going to derail it.  If anything we’ll most likely come back rejuvenated and inspired to get back to action.

What pizza taught me:

When the stressors of life are peaking, maybe some personal time with a personal pizza is the ticket to avoiding burn-out.  If some unexpected extra mozzarella can keep me mentally stable, I’ll take it, even if it’s on a Tuesday.

What I’m reading:  Wooden on Leadership: How to Create a Winning Organization -John Wooden